The pleasure of kindness is that it connects us with others; but the terror of kindness is that it makes us too immediately aware of our own and other people’s vulnerabilities (vulnerabilities that we are prone to call failings when we are at our most frightened). Vulnerability — particularly the vulnerability we call desire — is our shared biological inheritance. Kindness, in other words, opens us up to the world (and worlds) of other people in ways that we both long for and dread. How can people, from childhood onward, feel confident to take such risks? 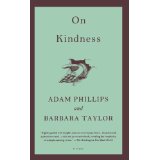 Kindness is the foundation of the world’s greatest religions and most-enduring philosophies. Why, then, does being kind feel so dangerous? If we crave kindness with such intensity, why is it often the last pleasure we permit ourselves? And why — despite our longing — are we frequently suspicious when we are on the receiving end of it?
.
Drawing on intellectual history, literature, psychoanalysis, and contemporary social theory, this brief and essential book will return to its readers what Marcus Aurelius declared was mankind’s “greatest delight”: the intense satisfactions of generosity and compassion.

Adam Phillips is a British psychotherapist and essayist. He began his career working as a child psychotherapist. Presently, Phillips divides his time between writing and his private practice in Notting Hill. He is a prolific author.

Phillips has been the general editor of the new Penguin Modern Classics translations of Sigmund Freud since 2003. From 1990 to 1997 he was principal child psychotherapist at Charing Cross Hospital in London. He worked in Britain’s National Health Service for seventeen years. Since 2006, Phillips has been a visiting professor at the University of York English department. He is also a regular contributor to the London Review of Books.

Phillips has been described as: 1) Britain’s foremost psychoanalytic writer; and, 2) the best theorist of the modes and malfunctions of modernist psychology. For his intellectual resources, Phillips draws from philosophy, literature, and politics, as well as other fields. Though highly touted by many experts, some question his opinions and methodology.

Books by Adam Phillips include:

Barbara Taylor
born 1950
Barbara Taylor is a Canadian-born historian based in the United Kingdom. Taylor specialises in Enlightenment history, gender studies and the history of subjectivity. She is Professor of Humanities at Queen Mary, University of London.

.Upon coming to Queen Mary University in 2012, Taylor took up a joint professorship in the Schools of History, and English & Drama. Her previous post, which she held since 1993, was a post in History at the University of East London.  She has I also held visiting professorships at the universities of Amsterdam, Indiana, Notre Dame, and at the School for Advanced Studies in the Social Sciences, a leading French institution for research and higher education in the social sciences.

Taylor is an intellectual and cultural historian with a special interest in the subjective dimension of historical change. Her early research focused on feminist theory and history. She has published two well-known books on early British feminism.

Barbara Taylor has edited these books:

3 thoughts on “Kindness and Vulnerability – How Are They Related?”