Historical criticism developed among European Protestant scholars, especially in Germany, and became the dominant methodology for studying the Bible by the late 19th century. By the mid-20th century, it had been embraced by many Jewish and Roman Catholic scholars, and it continues to be used by a majority of scholars alongside other interpretive strategies.

Historical critics seek first of all to be critical, in the way that reviewers try to evaluate a book, film, or a concert without prejudgment. In the study of the Bible, such an approach means understanding the Bible as a collection of works in many genres written by individuals in particular times and in particular places over many centuries. To interpret the Bible as a historical critic, then, is to look at it not as inspired and inerrant, but on its own terms as the words of various named and unnamed authors.

Philosophy has no single beginning, but it would be naive to assume philosophical thinking erupted spontaneously in various spots around the world.

In addition, there were great civilizations south of the Mediterranean, not only in Egypt, but in Nubia (now Ethiopia) and further up the Nile. These cultures had sophisticated systems systems of astronomy, advanced mathematics, complex and thoughtful views of the nature of the soul, and an obsession with the question of life after death.

Many of the leading ideas of Greek philosophy (which arose in 6th century BC), including interests in geometry and the concept of the soul were imported imported from elsewhere. Indeed, it might be most accurate to see the great “miracle” of ancient Greece not as a remarkable beginning, but as a culmination – the climax of a long story the beginnings of which we no longer remember.

A Passion for Wisdom: A Very Brief History of Philosophy
Robert Solomon and Kathleen Higgins

Stonehenge is a monument located near Salisbury in southern England. It is nearly as old as the pyramids, though on a smaller scale. It was built with a sophisticated understanding of geometry and the movement of the sun.

Stonehenge is a vast arrangement of concentric circles of stone and holes that were perhaps intended to hold posts or other stones. The remains of Stonehenge, which was built in three phases over a period of about 1,000 years between 3000-2000 BC, consists of huge standing stones, some surmounted by stone lintels (horizontal blocks). 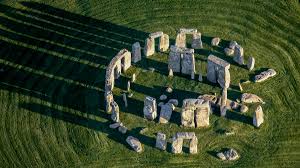 The arrangement of the stones shows an ability to work with circles in space, and the curved lintel stones demonstrate an understanding of arcs of a circle – when all were in place, the lintel stones would have formed a true circle, not a series of straight lines.

The only tools available to the builders were picks made of deer antlers and stone hammers, yet they were able to calculate and measure portions of a circle and distances. The northeast axis aligns with the position of the rising sun at the summer solstice (longest day of the year), suggesting that some form of calendar had been developed.

How the World Works: Mathematics: From Creating the Pyramids to Exploring Infinity
Anne Rooney

In our secular age, some might think it surprising how much interest there still is in the Bible, as the celebrations in 2011 for the 4th centenary (400 years) of the King James Version (KJV), sometimes referred to as the Authorized Version (AV), clearly showed. Even those who do not believe in Christianity continue to be fascinated by the Bible’s presence.

The Bible in Western Culture

For believers, the Bible is often seen as inspired by God and having a high level of authority in matters of belief and practice. For non-believers, the Bible is a central document of western culture – it continues to interest many readers as a collection of major literary works. The history of these works, and of how they have been disseminated and interpreted, is a central part of the history of western literature.

A History of the Bible: The Story of the World’s Most Influential Book

The Sumerians were a people of mysterious origins, who migrated south from the mountains in Turkey in prehistoric times and settled in the hot, fertile delta in Mesopotamia between the Tigris and Euphrates rivers. Around 5000-4000 BC the Sumerians began to master flood control and irrigation and built walled settlements.

Sumerian stories, first passed on via oral traditions, come to us today as texts pressed on clay tablets that date from 2100 BC, near the end of their history. They recorded their myths in a phonetic script they invented, called cuneiform (“wedge-shaped”).

One of the the oldest written languages on earth, Sumerian became the scientific, sacred, ceremonial, and literary language for the Assyrians, Babylonians, Persians, and many other surrounding cultures for centuries, despite the fact that, to become fluent, one had to master its separate dialects for men and women.

For subsequent cultures, Sumerian – the language and culture – was admired as the equivalent of Greek in Roman society or Latin in medieval Europe. Sumerians encouraged this practice with stories of the glories of their rulers and gods. Conquerors of Sumer borrowed Sumerian stories in creating their own myths. The Bible itself indicates the importance of Sumer – Abraham and Sarah trace their lineage back to Ur, the last capital of Sumer, from which they migrated westward to Canaan (Genesis 11:26-13:12).

Ziggurat at Ur (artist’s rendering)

The Sumerians built ziggurats to replicate their cosmic mountain, complete with paradise, linking the heavens with humanity. Rising from the river delta, ziggurats were rectangular towers, stepped to look like a mountain, with trees and shrines at every level. At the peak, one or more temples were constructed with a main sanctuary and multiple side rooms with altars for making sacrifices.

The temples were lavishly decorated, with vividly colored mosaics and frescoes showing the whole range of life-giving community activities, including planting, harvesting, herding, and processions to temples. Beautiful flowers, guardian animals such as leopards and bulls, and mythical beasts such as eagles with lion heads and bulls with human faces, adorned porticoes and sanctuaries. These centers for ritual, towering above the deltas, grew to contain housing for the community’s priests, artists, engineers, scribes, and other tradespeople.

Sumerian stories and art celebrated the goodness of ordinary life in ways we can still understand, depicted as activities of paradise. Their myths tell of gods enjoying sexual pleasure, making music, dancing, traveling about having adventures, and encouraging fertility of the land.

The Sumerians told their stories of creation and paradise as a preface to their stories of their many gods. The prefaces were a literary formula such as “once upon a time when…” or “in the beginning when God created…” These recitations established the way the world was at its best, as a contrast to the stories they told of disasters, conflicts, violence, and war. Sumer became the lost primordial culture of West Asia. By the time Genesis was written, the Sumerians’ myths had been adapted and edited through more than 1,000 years of history in Canaan, where Abraham and Sarah, the legendary immigrants from Sumer had migrated.