Biocentrism, also known as the biocentric universe, is a theory of everything.  Biocentrism proposes that, rather than a belated and minor outcome after billions of years of lifeless physical processes, life and consciousness are absolutely fundamental to our understanding of the universe. From the perspective of Biocentrism, our current theories of the physical world don’t work, and can never be made to work, until they account for life and consciousness.

Biocentrism was proposed in 2007 by American scientist Robert Lanza. 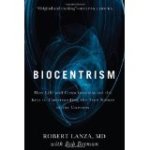 Robert Lanza, MD is an American medical doctor and scientist. Lanza is one of the most respected scientists in the world. He is Chief Scientific Officer of Ocata Therapeutics (formerly named Advanced Cell Technology) and Adjunct Professor at the Institute for Regenerative Medicine, Wake Forest University School of Medicine. Lanza has 100’s of publications and inventions and more than two dozen scientific books to his credit. He is the author of Principles of Tissue Engineering (4th Edition 2013), recognized as the definitive reference in the world.

Robert Berman — known as Bob Berman — is an American astronomer, author, and science popularizer. Berman runs Overlook Observatory at his home in Woodstock, New York, USA. He was an adjunct professor of astronomy at Marymount Manhattan College, from 1996 to 2000. He is “Strange Universe” columnist for Astronomy magazine, is responsible for the astronomy section of The Old Farmer’s Almanac, and has led aurora and eclipse expeditions as far away as the Arctic and Antarctic.