Our Need for Stories

We humans have a compelling need for stories that order our memories and hopes, and give shape and meaning to our individual and collective lives. A society with a belief in something that goes beyond itself, a narrative that goes beyond the immediate and beyond the self, seems better equipped to confront threats to its existence, to survive and to flourish.

At the beginning of the 20th century, the French sociologist Emile Durkheim argued that without such overarching stories there can in fact be no society. Those stories, the ideals they illustrate and the ceremonies in which they are enacted constitute for Durkheim the essential elements of any society of communal belief – and, in a sense, the stories are the society. If, for whatever reason, we lose or forget them, in a very real way we, collectively, no longer exist.

Systems of Belief – Narratives of Meaning

Systems of belief almost always contain a narrative of how the physical world was created, how the people came to be in it, and how they and all living things should inhabit it. But the stories and associated rituals usually go far beyond that. They tell members of the group how they ought to behave to one another, and crucially they also address the future – those aspects of the society that will endure as succeeding generations come and go. They embrace the living, the dead and those still to be born, in one continuing story of belonging.

The most powerful and most sustaining of any society’s stories are the work of generations. They are repeated, adapted and transmitted, absorbed into everyday life, ritualized and internalized to such a degree that we are often hardly aware that we are still surrounded by the tales of distant ancestors. They give us our particular place in a pattern which can be observed but not fully understood – and they do it almost without our knowing it. 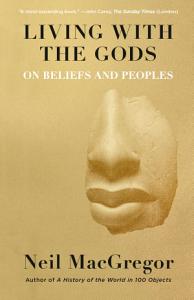 Living With the Gods: On Beliefs and Peoples
Neil MacGregor

Robert Neil MacGregor, OM, AO, FSA, is a British art historian and former museum director. He was the editor of the Burlington Magazine from 1981 to 1987, then Director of the National Gallery, London, from 1987 to 2002, Director of the British Museum from 2002 to 2015, and is currently the founding director of the Humboldt Forum in Berlin.

MacGregor has made many programs for British television and radio. In the year 2000, he presented on television Seeing Salvation, about how Jesus had been depicted in famous paintings. More recently, he has made important contributions on BBC Radio Four, including A History of the World in 100 Objects and, in 2012, a series of fifteen-minute programs after The World at One called Shakespeare’s Restless World, discussing themes in the plays of William Shakespeare.

Books Neil MacGregor has written include:

2 thoughts on “How Do Stories Shape And Give Meaning To Our Lives?”