The incense kingdoms of Southern Arabia (today’s Yemen and Oman) produced the finest quality frankincense and myrrh – two of the most sought-after commodities of the ancient world. They also had a virtual monopoly on the transport and distribution of these two valuable items.

In the comparative peace brought by the Roman Emperor Augustus, at the end of the first century BC, demand for frankincense and myrrh was soaring. Thousands of pounds of incense were making their way by land and sea to Alexandria, Rome and Gaza, to the former Persian Empire now controlled by Parthians, to India and even China. 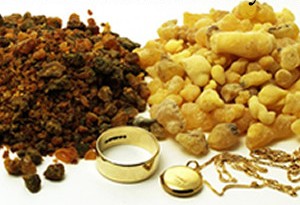 Frankincense, the resin from the Boswellia tree, was as expensive as gold at the time of Jesus. Frankincense was the ancient world’s equivalent of crude oil. It was an indispensable element of public and private life, of all religious and state ceremonies in the Roman Empire as in the rest of the then known world.

Frankincense was probably the most essential luxury of the ancient world, and it made the kingdoms of Southern Arabia fabulously wealthy.

Myrrh, a thorny bush, which like frankincense grew in Southern Arabia, was the essential ingredient for embalming bodies. More expensive than frankincense, it was in less demand and used less frequently in religious ceremonies.

Like frankincense, myrrh was mixed in cosmetics and perfumes and was used as a cure-all, including to prevent poisoning. It was also used to relieve pain, which may have been why Jesus was offered a mixture of myrrh and wine before the crucifixion.

Ingredient in Worship by Various Traditions

And Man Created God: A History of the World at the Time of Jesus
Selina O’Grady

Selina O’Grady is a writer, producer, and speaker.

O’Grady is the co-editor of two books: Great Spirits: The Fifty-Two Christians who Most Influenced their Millennium and A Deep But Dazzling Darkness. She has reviewed regularly for the San Francisco Chronicle, Literary Review and Tablet.