What’s the universe made of? The biggest thing we know about the universe is that we don’t really know that much. All the stuff (matter and energy) in the universe we know about accounts for only about 5% of the total.  According to our current understanding, we don’t know what the other 95% is made of. All the atoms in our body and in our galaxy, all the stars and dust and planets, amounts to just a tiny fraction of the whole.  Is this not mind-boggling?

What We Know About the Universe
. 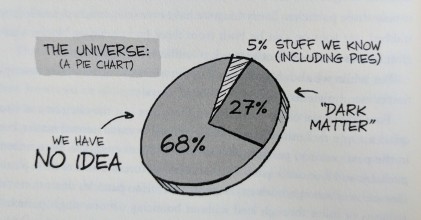 This pie might look mysterious, but it shows our current understanding of the the universe:

It’s notable that even within the 5% of the stuff we know about, there are still a lot of things we don’t know (for example, details about neutrinos). In some cases, we don’t even know how to ask the right questions that will reveal these mysteries.

Lots of Exploration Still to be Done

There’s a huge amount of exploration left to do. In fact, we are in the early days of a whole new age of exploration. We are entering a period where we will likely redefine our understanding of the universe. On the one hand, we presently know we know very little; on the other hand, we are building incredible new tools, such as powerful new particle colliders, gravitational-wave detectors, and telescopes that will help us get the answers we are seeking.

The history of science is one of revolutions in which we discover each time that our view of the world was distorted by our particular perspective. A flat Earth, an Earth-centered solar system, a universe dominated by stars and planets – these were all reasonable ideas given the data at the time, but now we see them as embarrassingly naïve. Almost certainly, there are more such revolutions  around the corner, in which important ideas we accept now, such as relativity and quantum physics, might be shattered and replaced with currently unforeseen new ones. 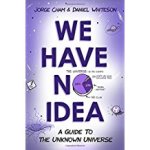 We Have No Idea: A Guide to the Unknown Universe (2017)
Jorge Cham & Daniel Whiteson

Jorge Cham earned his PhD in robotics at Stanford. Cham is the creator of the popular online comic Piled Higher and Deeper, also known as PhD Comics.

Daniel Whiteson is a professor of experimental particle physics at the University of California, Irvine, and is a fellow of the American Physical Society. Whiteson conducts research using the Large Hadron Collider at CERN, a European research organization that operates the largest particle physics laboratory in the world, located in Geneva, Switzerland.