What will you manage to make of today before it slips from your fingers and becomes the past?

“Let us therefore set out whole-heartedly, leaving aside our many distractions and exert ourselves in this single purpose, before we realize too late the swift and unstoppable flight of time and are left behind. As each day arises, welcome it as the very best day of all, and make it your own possession.”

You will get only one shot at today. You have only twenty-four hours with which to take it. And then it is gone and lost forever. Will you fully inhabit all of today? Will you call out, “I’ve got this,” and do your very best to be your very best? 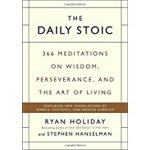 The Daily Stoic: 366 Meditations on Wisdom, Perseverance, and the Art of Living
Ryan Holliday

Seneca (full name: Lucius Annaeus Seneca) was a Roman Stoic philosopher, statesman, and dramatist. He was a tutor and later advisor to emperor Nero. He was born in Cordoba in Hispania, and raised in Rome, where he was trained in rhetoric and philosophy.

Seneca writings expose traditional themes of Stoic philosophy: the universe is governed for the best by a rational providence; contentment is achieved through a simple, unperturbed life in accordance with nature and duty to the state; human suffering should be accepted and has a beneficial effect on the soul; study and learning are important. Seneca emphasized practical steps by which the reader might confront life’s problems. In particular, he considered it important to confront one’s own mortality. Discussion of how to approach death dominates many of his letters.

Works attributed to Seneca include a dozen philosophical essays, one hundred and twenty-four letters dealing with moral issues, nine tragedies, and a satire.

One thought on “How Can We Live Today Fully, Before It Slips Into The Past?”