The importance of Meister Eckhart on Divine Knowledge cannot be overstated. The book is thought to be the most profound study of the core theological and philosophical themes of Meister Eckhart ever written. It is also the greatest exegesis of Christian non-dualism ever published. 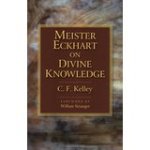 Meister Eckhart was a German theologian, philosopher and mystic. He was a late medieval Dominican spiritual master.

Eckhart has acquired status as a great mystic within contemporary popular spirituality, especially since many of his teachings transcend religious boundaries. Scholars have shown considerable interest in Eckhart, situating him within the medieval scholastic and philosophical tradition.

Eckhart preached about the nature of God, The Trinity, the relationship of the human soul to God, and the processes inherent in these and other Christian concerns. His writings in the German vernacular, for common folks, are quite accessible; whereas, his Latin works, written for the Church, are more difficult.