When we remember what has happened before now, it is just as much about the present as the past. It is the relevance of the past that makes us remember it in the present. This applies to the early Christian storytellers in the oral stages of the stories about Jesus, stories that weren’t written down until 40 to 65 years after the fact. They told stories that remembered Jesus’s past in light of the community’s present. These may have been “distorted” memories, but nonetheless they were valuable memories, and no less real to the people who held them and shared them than recollections that actually were rooted in the life of the historical Jesus.

Oral cultures have a different conception of tradition from written cultures. In written cultures, such as ours, the idea of preserving a tradition means to keep it intact, verbatim, the same, from one telling to the next. In oral cultures, all one can do is try to remember if a spoken version of a tradition is the “same” as an earlier version. But in fact, being exactly “the same” — in our sense of verbatim repetition — is not a concern in oral traditions. That concern came into existence in written cultures, where such things could be checked.

Studies have shown that those passing along traditions in oral traditions are not interested in preserving exactly the same thing. They are interested in making the same thing relevant for the new context. That necessarily involves changing it. Every time. For that reason, when someone in an oral culture claims that the current version of the tradition — a story, a poem, a saying — is the “same” as an earlier one, they do not mean what we mean. They mean “the same basic thing.” They do not mean “exactly” the same. At all. 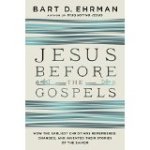 Jesus Before the Gospels: How the Earliest Christians Remembered, Changed, and Invented Their Stories of the Savior
Bart Ehrman
.
.
.

Bart Ehrman is an American New Testament scholar. Ehrman is the James A. Gray Distinguished Professor of Religious Studies at the University of North Carolina at Chapel Hill. He completed his M.Div. and Ph.D. degrees at Princeton Seminary, and began his teaching career at Rutgers University.

Ehrman’s work focuses on textual criticism of the New Testament, the historical Jesus, and the development of early Christianity. He has written and edited 30 books, including three college textbooks. He has also achieved acclaim at the popular level, authoring five New York Times bestsellers.

Books by Bart Ehrman include: