Creativeness often consists of merely turning up what is already there. Did you know that right and left shoes were thought up only a little more than a century ago?
…..— Bernice Fitz-Gibbon 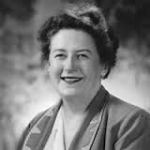 Bernice Fitz-Gibbon was an American advertising executive and a pioneer in retail advertising, working at Marshall Field’s, Macy’s, Gimbels and Wanamaker’s. She was inducted into the Advertising Hall of Fame in 1982.

Fitz-Gibbon was the creator of the Macy’s slogan “It’s great to be thrifty” and “Nobody, but nobody, undersells Gimbels.” A former ad manager at Marshall Field’s, Macy’s, Gimbels and Wanamaker, she became retailing’s most important and highly paid advertising director.