Of all the great minds that have influenced contemporary thought, Socrates, Buddha, Confucius, and Jesus have had the most profound and lasting impact. These exemplary individuals taught us how to live as well as how to think. They were individual personalities, and seminal philosophers of unsurpassed importance. 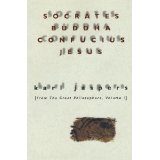 Karl Jaspers was a German-Swiss psychiatrist and philosopher. Jaspers had a strong influence on modern theology, psychiatry and philosophy. After being trained in and practicing psychiatry, Jaspers turned to philosophical inquiry and attempted to discover an innovative philosophical system. He was often viewed as a major exponent of existentialism in Germany, though he did not accept this label.

Books written by Karl Jaspers include:

One thought on “Socrates, Buddha, Confucius, and Jesus”